Click here to listen to the audio recording of this 32-minute message. Or watch the video on Facebook (the message starts at about 24 minutes). Or read the summary below.

The final chapter of Luke’s Gospel (chapter 24) tells us of the fall and rise of faith. Ordinarily in English, we’d talk about the ‘rise and fall’ of something, but in this narrative, the order is truly first the fall of faith and then the stumbling, feeble rise of faith. It is a story of the fragility of faith, and tell us about some of the key ingredients that help to build faith: walking, friends, scripture, fellowship, the Eucharist, and worship. It is through our encounters with these elements – in all of which Jesus is fully incarnated and present – that we discover faith. With all its ups and downs and faltering.

v1-10: The women visit Jesus’ tomb early on the third day, on Easter Sunday, and find it empty. But they encounter shining men, like angels. They rush back to tell the men.

v11: But the men “did not believe the women”. Just so. Perhaps a clear example of patriarchy, because Peter immediately goes to verify what they have said. Or perhaps a clear sign of the fall of faith.

v12: Peter finds the tomb empty, but is baffled. We goes away, wondering to himself what had happened. We applaud his thoughtful reflection. But there is a sense of Peter feeling disoriented and lost – wandering alone. His faith falters and falls.

v13: Still on that same day, two of the disciples leave Jerusalem to head to a village called Emmaus. It’s still Easter Sunday and already we see the start of a scattering of the disciples, a fragmenting of the fellowship that had sustained them for three years, and of a movement away from the centre of the Easter narrative – away from Jerusalem. Faith falters when we fall out of fellowship with each other and when we walk away from the church.

v14-18: As they walk a man joins them – it is in fact “Jesus himself” – but their eyes are kept from recognising him. So they engage him as a stranger, and we get insight into their true feelings and thoughts about current events.

v19: When they describe Jesus to this traveller, they use language associated with Moses – a great man, but just a man. A powerful prophet, but just a human prophet. All sense of Christ’s divinity and majesty, all the prophesies he mentioned, linking himself to the suffering servant in Isaiah, are forgotten. Faith has fallen.

v21: “We had hoped” they say – meaning the hope they had had, has now been lost. And they mention that “it is the third day since all this took place”. Somewhere they remembered Jesus saying that on the third day he would rise again. It was now the third day and there was no sign of him (or so they thought). Whatever shreds of hope – of faith – they had had were rapidly slipping away. Faith falls further.

v22-24. They mention the women – that the women “amazed” them – and confirm that the tomb was found just as they said. “But they did not see Jesus.”

v25-29: The traveller (Jesus, but still not recognised) then explains to them how everything in the first testament scriptures point towards Jesus. But still they do not recognise him. Though they appreciate him enough to persuade him to stay and join them for dinner.

v30: “At the table with them, he took bread, gave thanks, broke it and began to give it to them.”

v31: THEN!! Ah, this wonderful THEN! “Then their eyes were opened and they recognised him!” It was in this moment of sharing a meal together that they recognise him. No fanfare. No miracle. No sermon. No revelation. Just a simple meal, where Jesus took, blessed, broke and gave the bread, just like at any other Jewish meal. And then their eyes were opened. Faith surges!

v32: And though he disappears from their sight, they then remember that as he taught them from the scriptures, their hearts were burning within them. Faith rises!

v34: Simon had, in the meantime, also seen Jesus, and the disciples were exclaiming, “It is true! The Lord has risen!” Jesus, no longer just a prophet, but The Lord. Faith rises some more! And the two disciples share their story with the group. Through sharing faith continues to rise.

v36: In that moment Jesus appears among them, with his familiar post-resurrection assurance, “Peace be with you.”

v37-38: Immediately, however, they are startled and frightened, thinking him a ghost, troubled and doubting. Faith so quickly falls.

v41: But “they still did not believe it”! When faith falls, it struggles to rise.

v42: Jesus provides more evidence by eating food, to demonstrate that he is no ghost, but flesh and blood. But still no faith response.

v44-49: Then Jesus teaches, as he taught the two on the road to Emmaus. And he “opened their minds so they could understand the Scriptures”. We are not, however, told how the disciples received this and how it influenced their faith. Indeed, curiously, neither of Jesus’ teachings (in vv25-27 and vv45-49) appears to prompt a rise in faith.

v50-51: Jesus then goes out, blesses them and is taken up before their very eyes into heaven.

v52-53: THEN!! Ah, this wonderful THEN again! “Then they worshipped him and returned to Jerusalem with great joy, and stayed continually at the temple, praising God.” Finally! Faith rises. In v32, faith rose through the simplicity of a shared meal, friendship and the symbolic breaking and sharing of bread. In v51, faith rose through the lifting up of the Son of God and of the disciples’ eyes towards heaven – a visual lifting up towards God.

Your faith, like my faith, like the disciples’ faith, rises and falls, falls and rises. It is seldom a nice smooth, continuous, upwards line. It ebbs and flows, waxes and wanes, rises and falls. But we see in this narrative, with all the real humanity of humans, the important ingredients of walking, friends, scripture, fellowship, the Eucharist, and worship.

Click here to listen to the audio of this 12-minute message. Click watch the video below, or read the text thereafter.

Between Easter and Pentecost we focus on people’s encounters with the risen Christ. Last week we reflected on Thomas’ encounter with Jesus some days after the resurrection. Today, in Luke 24: 13-35, we reflect on the two disciples who met Jesus while they were travelling from Jerusalem to Emmaus. They don’t realise that it was Jesus until the very end. Their journey has three phases:

In hindsight, they realised that they had encountered Jesus: “Were not our hearts burning within us while he talked with us on the road and opened the Scriptures to us?” (Luke 24:32)

Ultimately, it is in the taking, thanking, breaking and giving that they recognise Jesus. This is what Jesus did in Luke 9:16, when he fed the five thousand. And also just a few days before at the Last Supper in Luke 22:19. This celebration of the Eucharist (Lord’s Supper, Communion, Mass, Divine Liturgy) was the clincher, following fellowship and teaching, that reveals Christ to them.

This narrative follows the same pattern of the early church in Acts 2:42: “They devoted themselves to the apostles’ teaching and to fellowship, to the breaking of bread and to prayer.” Now, our passage in Luke 24 doesn’t mention prayer, but prayer is (essentially) talking with and listening to Jesus. Prayer is just conversation with God. And this is what the two disciples were doing, even though they did not realise it, during the long walk from Jerusalem to Emmaus, as they journeyed with Jesus: they were talking with God. 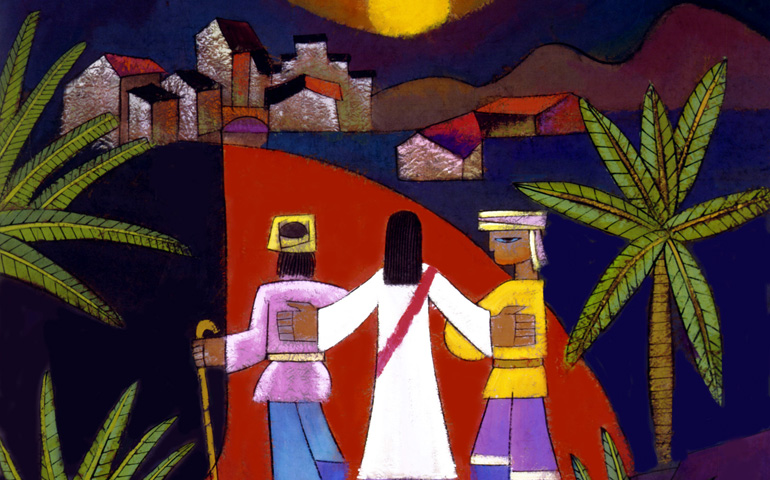 Welcome! My name is Adrian. I am the priest at St Stephens, Anglican Church, in Lyttelton, South Africa. I am a professor of social work between Sundays. I’m married to Trina and we have a 22-year-old son. I love the opportunity to preach – to reflect on God’s love for the world and our calling to be loving in response.